Disintegration of the intestine caused by deoxynivalenol (DON), which is a fungal metabolite found in cereal grain-based human and animal diets, triggers severe intestinal inﬂammatory disease. Hydrolyzed wheat gluten (HWG) can promote the development of intestine. Therefore, HWG was administered orally to male mice on 1–14 days, and DON was administered to them on 4–11 days. Feed, water intake and body weight were recorded all over the experimental period. Blood samples were collected then the mice were sacriﬁced to collect the jejunum for crypt isolation and culture.

The intestinal morphology was observed by electron microscopy, and Western blotting was used to investigate intestinal stem cell (ISC) proliferation and diﬀerentiation, as well as the primary regulatory mechanism of the Wnt/β-catenin signaling. The results showed that HWG increased the average daily gain and average daily water intake of mice under DON-induced injury conditions, and increased the jejunum weight, villous height in the jejunum, and promoted jejunal crypt cell expansion.


The DON-induced decrease in Wnt/β-catenin activity, the expression of Ki67, PCNA and KRT20 were rescued by HWG in the jejunum, crypt and enteroid, as well as the number of goblet cells and Paneth cells. Furthermore, HWG increased jejunum diamine oxidase (DAO)activity. In conclusion, HWG alleviates DON-induced intestinal injury by en- hancing ISC proliferation and diﬀerentiation in a Wnt/β-catenin-dependent manner. 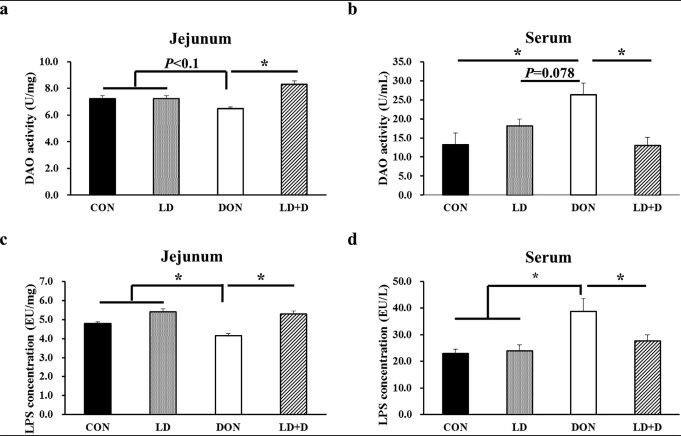 
The integrity of intestinal epithelium is a crucial defense against bacteria and viruses living in the environment, as well as natural toxins occurring in food and feed (Sartor and Wu, 2017; Vignal et al., 2018). The maintenance of intestinal homeostasis depends on the continuous proliferation and diﬀerentiation of Lgr5-positive intestinal stem cells (ISCs), which are interspersed between terminally diﬀerentiated Paneth cells and located at the lower third of the crypts with a highly dynamic niche (Snippert et al., 2010).

The Paneth cell-derived niche supplies ISCs with essential pro-proliferative and diﬀerentiative factors that in- clude Wnts; thus, the activity of ISCs is tightly controlled by the Wnt/β- catenin pathway (Krausova and Korinek, 2012; Sato et al., 2011). Ad- ditionally, β-catenin accumulates in the cell cytoplasm and enters the nucleus, where it displaces the Groucho from TCF/LEF transcription factors, and TCF/LEF-β-catenin complexes thus act as bipartite tran- scriptional activators of speciﬁc target genes such as Lgr5 (Kretzschmar